The October Lower School assembly, which was masterfully conducted by Mrs. Reynolds due to Mrs. Fine being out of town, turned into a rather spirited event when players from the BlueJackets football team showed up to get the students hyped up about the final two home games of the season.

The players from the team included Sam Baker, Andre Braga, Harrison Wolliver, and Zion Roland. After BlueJackets coach Ryan Hearn introduced the players, Sam and Zion had the students do two chants to cheer on the football team, which will host Clearwater Central Catholic this Friday, October 21, at 7 p.m. The BlueJackets, who hold a 3-2 record and are tied for first in the district with Northside Christian, will finish the regular season with an important district contest at home against Northside Christian on October 28.

The Admiral’s Athletic Club president Jon Covington announced that any student wearing an Admiral Farragut spirit shirt will receive a FREE hot dog and drink during the homecoming football game. With the Homecoming game a week later on October 28, Mr. Covington has declared the Friday night game against Clearwater Central Catholic as “Farragut Family Football Night.” In addition, he said the class with the highest percentage of kids in attendance would receive a pizza party. Go BlueJackets!

Coach Arron Prather added to the excitement when he talked about his rise from being bullied as a child in elementary school to an Olympic athlete in track and field. In addition, he led the students in a song that included the lyrics:

“Super motivated, highly educated, downright dedicated, you check us out.”

Senora Forrester announced the October selection for Keys of Excellence, which is Responsibility. As a way of demonstrating this key of excellence and the September Key of Excellence, which was “Respect,” the kindergarten and first grade classes sang and signed the song, “Respect & Responsibility,” which they learned in conjunction with Mrs. Reynolds’ kindergarten class as well as during Mr. Gabe’s music class. Other highlights from the assembly included: 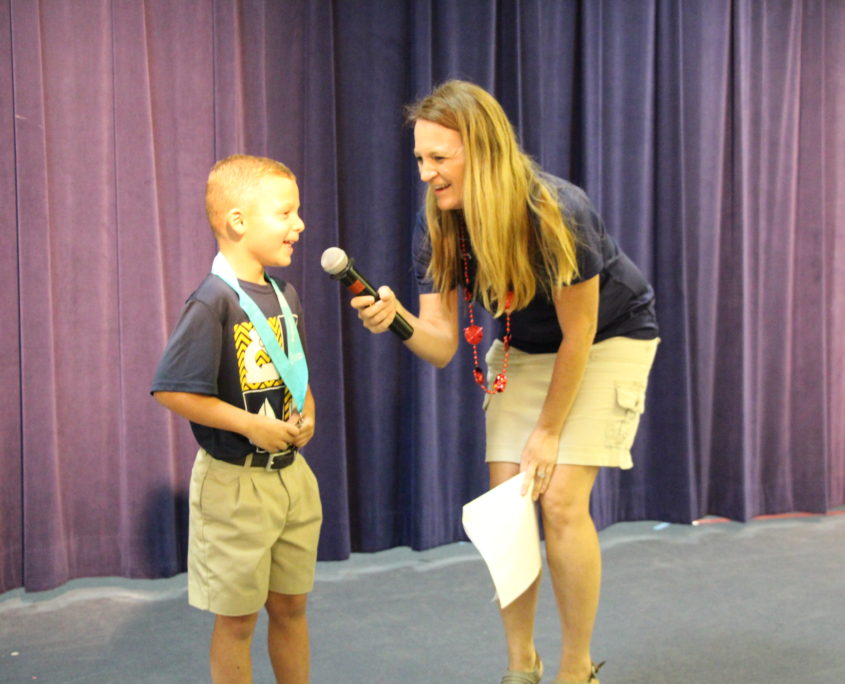 Mrs. Reynolds also announced the Lower School students are busy at work planning the morning news show, which will appear on YouTube soon.

Boarders play paintball, have a blast