Maren Lynch with her husband, Bill, and their two daughters, Claire and Katie.

Sure, a majority of us may equate her job tending to elementary school children at Farragut just as risky of an endeavor, but Mrs. Lynch has been spending her free time away from school over the past five years by jumping into open waters to compete against other swimmers (and marine life) in various competitions around the state.

“It’s an interesting dynamic, to say the least,” said Mrs. Lynch, who has taught in the Lower School at Farragut since 2003.

“Every time I jump into the water, the first thought that pops into my head is ‘please don’t get eaten by a shark.’ But then I just start focusing on my strokes and those thoughts go away.” While her first ever open water swim resulted in so much anxiety that she used a backstroke the entire race, Mrs. Lynch, 38, has developed into one of the best swimmers in her age group, which is currently 35-39. Recently, on May 7, she captured her second consecutive title at the 19th Annual Hurricane Man Pass-A-Grille Challenge Open Water event, finishing the 2.4 Mile swim in the Gulf of Mexico waters in 57:54.

Mrs. Lynch, who has raced in approximately 20 open water events, began the 2016 race circuit with the hopes of competing for the second time in the newly created Swim Around Lido Key but the event was cancelled due to extreme weather. While she didn’t officially get a chance to compete against 149 other entrants, she swam the seven-mile course once conditions calmed the next day, finishing in a little under three hours.

“That’s just the competitor in me, I guess,” said Lynch, who grew up playing basketball and volleyball in high school in Durand, Illinois.

She did, though, get to compete with Largo residents Debby Farias and Anna Stantz in the three-person 12.5 mile relay event at the 40th Annual Swim Around Key West in June, finishing a respectable 10th in the three-person relay division. Better yet, she was able to glide through the water along dolphin instead of sharks. 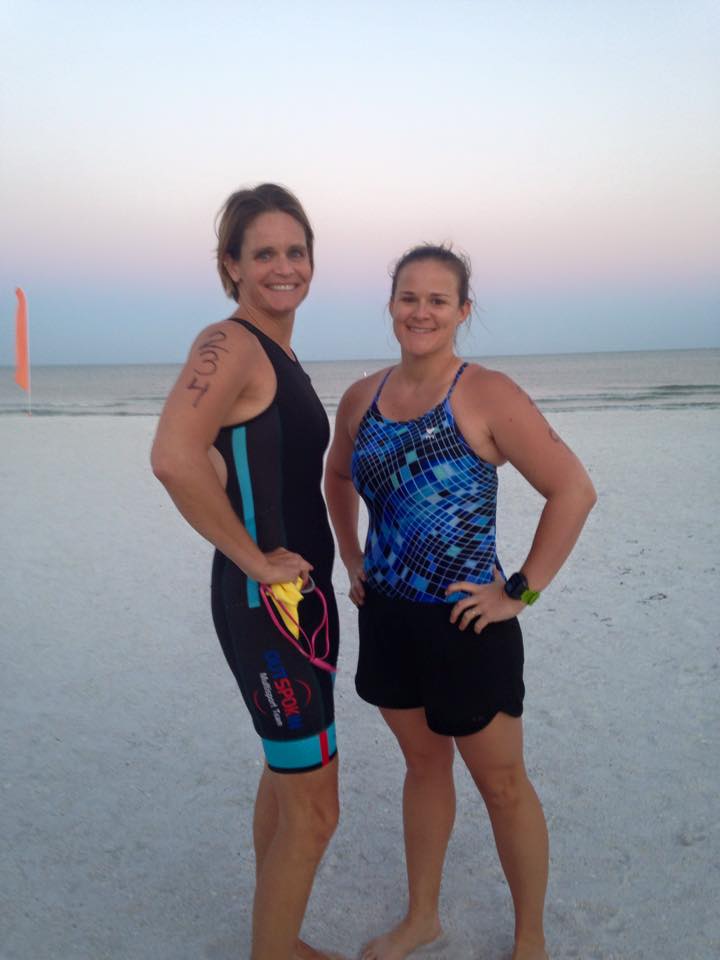 “That was the first time swimming in Key West and it was just beautiful,” said Lynch, who plans on doing both the two-person relay at the Key West event in 2017. “The water was so clear. It was such a joy. Being from the Midwest, you don’t get to see coral when you swim, so it was amazing.”

Mrs. Lynch began swimming at an early age back in Durand, a small town named after the first president of the Racine-Mississippi Railroad. During the summers of her high school years, she manned the lifeguard post at the local pool, keeping watch over any of the 1,200 residents who chose to swim.

When she moved to Florida to attend the University of South Florida, she continued the profession at the Southwest Recreation Complex in Largo until graduating from USF with a degree in Education. There, she met her husband, Bill, who happened to be at the pool to improve on his swimming technique for triathlon competition.

“Bill is a great runner, does lots of running events, and is also a rock climber but when I met him that first day, I thought I would have to save somebody from drowning for the first time in my career as a lifeguard,” Mrs. Lynch joked. “I’ve learned over the years that most really good swimmers are not great runners and most great runners typically end up struggling as a swimmer.”

Nevertheless, he improved enough to win Mrs. Lynch over as both a partner in life and in competitive racing, enough so that she began competing in triathlons herself. In doing so, it stoked the fire of eventually just focusing on the swim aspect, both out of necessity and due to her passion for it.

“I love to swim and I’ve done so for most of my life,” said Lynch, whose two children — Katie (third grade) and Claire (kindergarten) — attend Farragut. “I enjoyed competing in the triathlons, but when Claire was born, I began having back problems so I gave up the running part.”

While she still rides 30-40 miles each weekend with Bill and rock climbs with him (as well as with Katie and Claire, who have become excellent at it), she swims almost on a daily basis. Four days a week (three before the school day and one on Saturday), she arrives at the Southwest pool at 5 a.m. and completes two miles before hustling back home, where Bill has readied the two girls for school. “Swimming in the morning is that moment of zen for me,” Mrs. Lynch said. “It calms me before the hectic day begins. I’m less antsy when I swim and it gives me that peace and quiet that I need to make the day successful.”