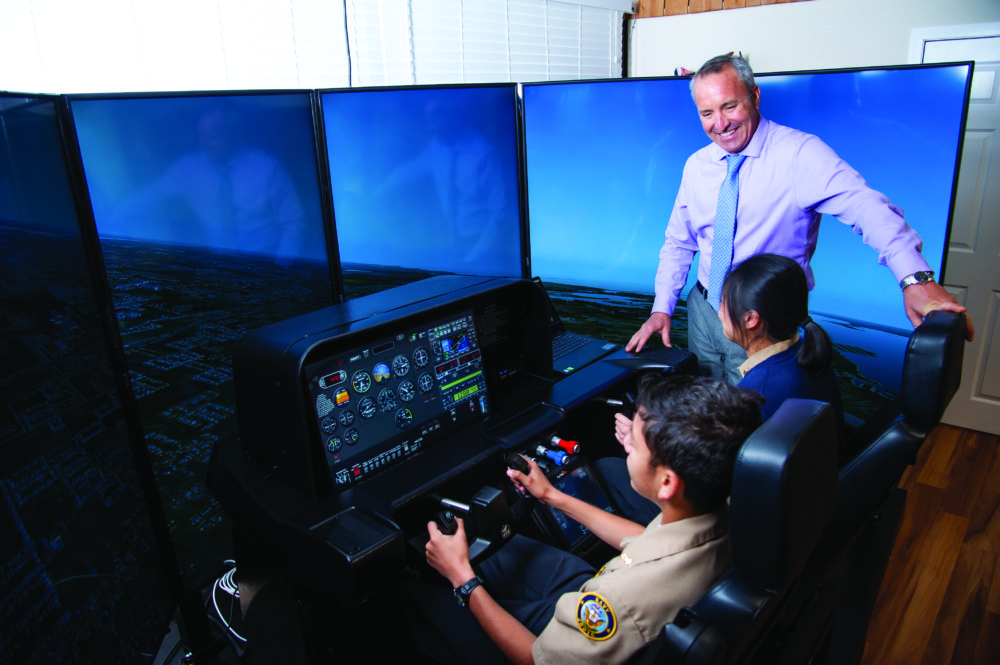 Since 1998, Admiral Farragut Academy has prepared young men and women to soar. While students at other schools might be focusing on an upcoming math exam, students in Farragut’s Aviation program master the fundamentals of flight, both on campus and in the air.

“Earning a private pilot certificate in high school is a tremendous accomplishment that requires both dedication and perseverance,” said Aviation Program Director Rob Ewing. “Students who choose to take aviation gain self-confidence, responsibility, career exposure, and a skill that looks impressive on a resume.”

Students may choose to take Aviation courses out of interest, while others sign up for Aviation Academy, which means they spend three periods during the academic day on flight training in order to earn the hours needed for their certificate.

On campus, they use a state-of-the-art flight simulator. In the sky, they hone their skills as pilots in one of the many rented Cessnas based at St. Petersburg’s Albert Whitted Airport.

Since our last Spring/Summer 2019 edition of Reveille, two more students earned their private pilot certificate and three more earned their solo endorsement. Here’s a little bit about each one. Oi Moreno, a 7-day boarder from Japan who attended Farragut from eighth grade to graduation, passed his private pilot check ride with an FAA Designated Pilot Examiner on May 15, 2019.

Biggest Challenge: “The toughest part of the process was the theory. There are many rules and procedures that I had to memorize and learn, but it was all worth it.”

Why Aviation? “I love being in the air,” Alex said. “Farragut has such a rigorous program, but when you’re in the air, it takes away all the stress and worries about homework and academics. It’s very freeing.” Matsuyoshi, a 7-day boarder from Japan who attended Farragut from 10th grade to graduation, passed his private pilot check ride with an FAA Designated Pilot Examiner on May 15, 2019.

Biggest Challenge: “Having all of the knowledge necessary. The test itself wasn’t that difficult because I was prepared, however, for the oral portion, you sit down and talk for 2.5 hours to the examiner and they ask you textbook as well as situational questions.”

Why Aviation? “I love seeing a birds-eye view of the world. I fly drones, but that’s different because you’re on the ground. You’re looking at it through a camera. But when you’re in a plane, you’re seeing it for real.” Zhang, a 7-day boarder from China who attended Farragut from 11th grade to graduation, flew solo for the first time on April 9, 2019. Zhou, a 7-day boarder from China who has attended Farragut since 10th grade, flew solo for the first time on April 24, 2019. Henderson, a day student from St. Petersburg who has attended Farragut since ninth grade, flew solo for the first time on Oct. 10, 2019.